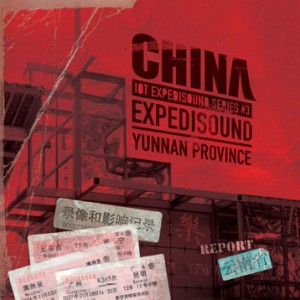 The CD set China Expedisound – Yunnan province will be launch on September 17th in France! I warmly invite you to visit the website Expedisound to discover the project and watch the teaser and to listen to the promotional sample. If you are not based in France you can also purchase the CD set online.

The electronic music label I.O.T Records has for several years been developing a collection of musical journeys, the series Expedisound. Building bridges between the cultures, Expedisound invites you to become aware of the extraordinary cultural diversity and the fragile minorities preserved from growing globalisation. Each travel is an intense experience in which the emotional dimension feeds the exchange. The musical and visual dimensions of the project attempt to testify to this intensity.

After Africa and Mongolia – the two first sections of the Expedisounds series – the last destination was China, for a 9 month residency in Naxi country, at the heart of the pre-himalayan landscapes of Yunnan. This third opus presents a new image: without the trailer of trucks or the loaded sound-system, and with a more tightly-knit team, the journey and the exchanges gained in intimacy and depth and reach other artistic horizons.

This journey thus gave birth to an ethno-electro cd created by 20 musicians from different backgrounds, a documentary and a cd based on a rare musical tradition, and finally a sonorous bank and bonus multi-dimensional tracks of the team crossing from North to South China.

Lucille Enel followed up with the entire project from the residency in Lijiang to the CD release. She dealed with the different parts, the French one IOT Records, Full Rhizome Association and the electro musician Cyberskum and the Chinese part with Na Yingyu, the video maker based in Beijing, the musicians of the Naxi Orchestra and the Shamans based in Yunnan, in order to make the project possible.

The CD set consist of two CD and an online documentary:

To compose this album, the electro producers were inspired by the soundbank collected (traditional music, atmospheres evidencing sonorous landscapes ) giving a second life to this travel sound diary. The 16 singles are part of the different currents of bass music. Trip-hop, Dub step, Breakbeat, Hip-Hop, Electro: the rhythms are slower, an echo of the sounds recorded during this journey.

The Naxi Bashaxili Traditional Orchestra is an ensemble of 16 musicians, farmers from the village of Changshui in Yunnan, who keep alive a fragile musical heritage.

This album attempts to portray the surprising popular tradition of the Naxi minority and the Bashaxili music. This music has an history of more than 800 years. It brings together a poetry about the everyday nature of existence, the reminiscence of an environment which is closely connected to the forces of nature, the celebration of a mythological spirituality, as well as a link to the very present ancestors. The China Expedisound project has enabled this unique orchestra to record and broadcast its first CD, and to hope for a better recognition in China as well as outside their borders.

3- Documentary “Long Water: In Memory of Mr. He Maogen” by Na Yingyu

The documentary of the Chinese film-maker Na Yinyu allows us to discover Bashaxili music throughout He Maogen’s destiny. He dedicated his life to the Naxi traditional music, studying it continually despite the arduous conditions of the cultural revolution. Later he created an orchestra in his own village of Changshui. After his death, his two sons assumed the duty of leading the Naxi Bashaxili Traditional orchestra, the last representation of a unique musical style. From performances on the main square of Lijiang, the Naxi capital, to daily work in the village, in a timeless scenery serving Na Yingyu’s aesthetic, the story of these humble and modest Naxi farmers revealed us another China and an unknown musical tradition.

For French-speking readers, here already some links to media report:

Success for Paper Tiger Cie at Relations theaterfestival in Munich