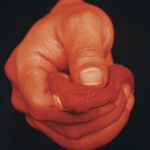 GU DEXIN: THE IMPORTANT THING IS NOT THE MEAT

From March 24th to May 27th, 2012 UCCA will hold the first monographic exhibition of the Chinese Artist Gu Dexin one of the pioneering presences of the generation that began making contemporary art during the 1980s in China.

The exhibition is drawn entirely from private collections, and including over eighty works from the Guy and Myriam Ullens Foundation Collection.

At this occasion an English monograph will be launched.

Gu Dexin (1962 Beijing) is perhaps the most avant-garde and radical of China’s leading contemporary artists. Although he did not formally study art, Gu Dexin quickly made a name for himself in the late 1980s with his strange, colorful portraits of alien beings and provocative experiments altering and reshaping plastics and other materials. In 1989, his work was already being shown in the Pompidou Centre in Paris. And since then this eminently uncollectible artist has broken every conceivable convention by using blow torches and other tools to reshape plastics, raw meat and fruits and vegetables. Decay is a central feature of many of his works. And some critics say he is showing the ugliness behind lofty ideals. His installations also sometimes feature sex objects carved out of meat and what appear to be piles of debris or reshaped plastics filled with dye. Experts say Gu Dexin’s art is a provocative statement about vulgarity and decay in the modern world; and that his works are a rejection of standard ideas of art. He is one of the few Chinese artists who avoids Chinese symbols. And he probably does the least to explain or market his works.

For details on Gu Dexin’s exhibitions I invit you to refer to DSL’s website.

A bit of Background to understand the title: