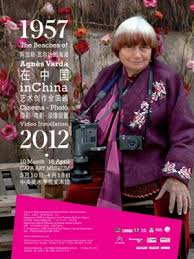 The exhibition “The Beaches of Varda” a unique retrospective gathering movies, photos and video installations.  Among them , “The Chinese Door”, an installation created especially for the occasion will display the pictures she has taken during her trip to China in 1957 which have never been shown to the public.  The exhibition will open at the Art Museum of the Central Academy of Fine Arts (CAFA) at 4:00pm on March 10th  and last until April 18th.

The exhibition will travel to Wuhan and Shanghai in the next two months.

Usually connected to the French New Wave, Agnès Varda’s work remains particular to her own unique perspective on the world while the themes and issues in her films focus on eroticism and age, death and time, the collective unconscious, and the presentation of social taboos.

Agnès Varda (born 30 May 1928) is a French film director and professor at the European Graduate School. Her movies, photographs, and art installations focus on documentary realism, feminist issues, and social commentary — with a distinct experimental style.

For more information on the exhibition please visit  CAFA & Timeout

A serie of films’ screening are taking place at UCCA:

For the films’ synopses please check on UCCA website.